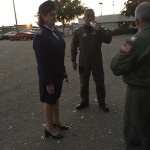 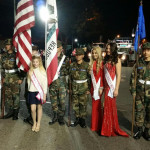 The 2015 Visalia Christmas Parade will be lead by the color guard from the Tulare-Kings Composite Squadron of Visalia. The cadets have practiced hard to be ready for the evening. Getting ready included having to order and prepare the flags, the guidon and the flag poles. The senior members did a great job putting together the equipment needed for the night.

So last night we met at Visalia airport for some more practice. Once ready all traveled to the parade. After a mini “Search and Rescue” to find the Commander, everyone met up at the starting line and had time before the parade to meet other participants. Some special participants came up to meet the cadets and asked for a picture with them. The queen and princesses of the parade were a huge success with the cadets.

The weather was a tad cool, but luckily it didn’t rain. The only unexpected event that happened was  when one of the horses had to relieve himself and of course they don’t mind doing so in public. The ladies holding the banner behind us didn’t get out of the way soon enough and their shoes got a little bit wet. I was so thankful the horses and other animals were BEHIND us! 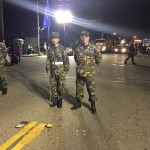 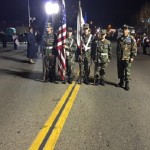 So many people came out for the parade and the cadets were a hit! People were lined up on both sides and they cheered and applauded as the cadets walked by. Some of the little ones would stand up and salute as we went by and some would want to give us the “high 5”.  There were all so cute.  The route was easy but it did seem to go on forever. We were all glad to see the end of the route. All in all it was a great night. 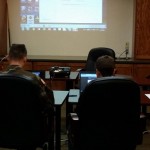 This weekend our cadets participated in Round 1 of the CyberPatriot contest. The competition puts teams of high school and middle school students in the position of newly hired IT professionals tasked with managing the network of a small company. In the rounds of competition, teams are given a set of virtual images that represent operating systems and are tasked with finding cybersecurity vulnerabilities within the images and hardening the system while maintaining critical services. Teams compete for the top placement within their state and region, and the top teams in the nation earn all-expenses paid trips to Washington, DC for the National Finals Competition where they can earn national recognition and scholarship money.​

The day started out well. While C/SMSgt Trowbridge was participating with his school in the Visalia Parade, Cadet Ross started working on finding and eliminating possible security threats in the virtual computer. Once C/SMSgt Trowbridge came in, they worked well as team to find as many security threats in both the Windows based operating system and the Ubuntu based operating system. 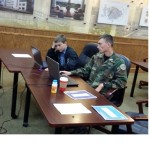 By the end of the day, both cadets had worked hard and exhausted all ideas of items they could find. We are awaiting for the CyberPatriot staff to score the results. Round 2 will be in December.